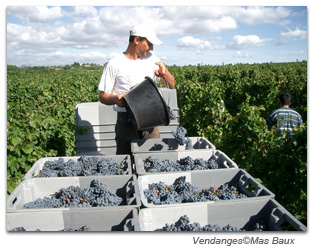 The clip of secateurs has been echoing in the Muscat à Petits Grains vineyards since the 5th of August. Grapes harvested very early have given the advantage of vivid fruit character to the first dry white wines.

And, as usual, the first harvests in France are taking place in the Roussillon.

The quality is materializing. The 2012 vintage is promising, and the last month of ripening unfolded under the best of conditions with very healthy fruit, contrary to the rest of France which was touched by rain, hail and vine diseases.

With respect to quantity, after 2011, the year of the century for the Roussillon, 2012 will remain in the memories of the growers as one of the smallest harvests they have ever known!